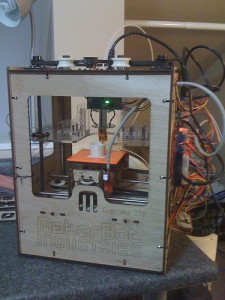 Wednesday, September 29th at 7:00pm Dorkbot will be hosting Marty McGuire who will be giving a talk on desktop 3D printing and giving a live demonstration on his printer.

Details as per him:

Rapid digital prototyping and fabrication technologies such as 3D printing and milling have existed for decades, but have been so expensive that they have remained largely in the hands of big manufacturers or researchers.  Now, thanks to open source hardware initiatives like RepRap, 3D printing has become a hobby that you can do at home.

Marty will talk a bit about the current state of commercial, community, and desktop 3D printing, and how one kit company in NYC, MakerBot Industries, is trying to turn this hobby into a revolution. He’ll also give a live 3D printing demonstration on his printer, MakerBot #131.

Marty McGuire lives in Baltimore and is a web developer for MakerBot Industries. He rides the Bolt Bus quite often.

One thought on “Dorkbot at the Node – Desktop 3D Printing with Marty McGuire (Wed. 9/29)”